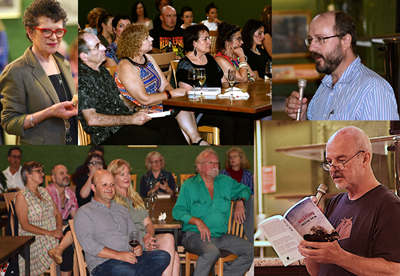 According to Stephen Romei in his Ragged Claws column, a queue was lining up to review Waiting for the Weekend Australian. A very positive short review in the international magazine Monocle, describes Waiting as “…an insightful novel about big characters with very little in life, exploring what this says about the rest of us.”

Antoni Jach has called Waiting “a bittersweet tale of the marginalised and the searching.” and that it is “Weirdly moving, tender and insightful”, while John Clarke has praised Salom as “a wonderful storyteller”.  Sue Woolfe says Waiting contains: “flashes of poetry and sudden insight and such profound compassion (it) should be labelled – WARNING: Could make the reader kinder”.

Romei wonders “why Philip Salom’s latest novel (which I hear is excellent) is called Waiting …”.

Philip explains “In Waiting there are people who live in rooming houses, physically or mentally vulnerable, surviving on disability pensions, and living in random groups  – usually men, but also women. They’re all waiting for something, in one way or another. These are characters and life encounters that rarely make it into novels.

I’ve wanted to write about them but never found a way in poetry to do them justice. I needed a style that was empathetic and yet mischievous, even comic in exaggeration. Irish writers like Samuel Beckett and Flann O’Brien can achieve this so I began with them in mind, and because I wanted to share a third-person narrative seamlessly with my characters, the writing is in a free indirect style. With so much raw language and uncensored attitude this might make a virtual Virginia Woolf shudder to read it, but Waiting owes a lot to her. The narrative is deliberately non-judgmental, and also of the moment. It’s about rough diamonds, not neat dramas.”

Read the March 5 2016 review of Waiting in the Australian. Waiting is now available on this website.